(THIS REVIEW FIRST APPEARED IN MORE THAN FOOD)

The Great Eastern Food Bar (GE) made its debut at the Bamboo Shopping Centre in Melville, in early 2014. Since then, it has been garnering a lot of attention from all the foodies in Jozi. I had been putting off the visit as I get more than my fill of Asian at Cyrildene (China Town). However, after having popped up in conversations more than once, I knew I had to make a trip to this place. After all, it wasn’t serving regular Asian fare.

The restaurant is located on the rooftop of the shopping centre, providing great views of the koppies. Luckily for us, a last minute cancellation assured us the best seats in the house! We got the very last table, right next to the balcony overlooking the road and the expanse beyond. 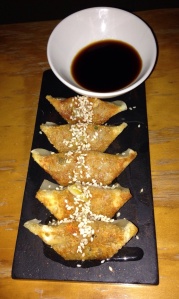 The vibe at GE, as it’s popularly called, was very relaxed. While we waited for our table, we watched Chef Nick Scott expertly put together a plate of sashimi tacos. As its Facebook page correctly states – GE serves an eclectic mix Asian inspired dishes. The Chef is also known to be constantly experimenting and adding new ramens and dishes to the menu.

Once seated, I ordered a ‘small’ sake (Japanese alcoholic beverage made from fermented rice), which was served in a cute little tumbler with two shot glasses. My partner ordered a ginger & lemongrass cordial. The sake, I felt was a bit too light (watered down) but the cordial was really refreshing. Some of the cocktails on the menu also looked very interesting.

For starters, we wanted to try one of their steamed buns, but unfortunately they had run out of buns. So we went with the sashimi tacos and the kimchi dimsums. Both dishes were beautifully presented and were delicious.

For mains, we ordered a plate of Korean crispy chicken – 5 pieces of sweet-chilly flavoured chicken, deep-fried with sesame. A bowl of fresh papaya salad was also served along with the chicken. The chicken itself was finger-licking good! The other main we ordered was a bowl of coconut ramen. This dish was made with really fresh vegetables, which were still crunchy and the coconut broth was served separately so one could add as much or as less as desired. The portion sizes of both the mains were large enough to be shared.

Bear in mind that their menu, although limited, is updated regularly. New dishes are introduced often and so you may realise that what you loved last month, may not be on the menu anymore!

In all, GE was a delightful experience with some awesome food and great service. Given that it is a small eatery, booking in advance is advisable. Cost wise, it might seem a tad expensive (approx. R500 for two including drinks), but the food is worth it.