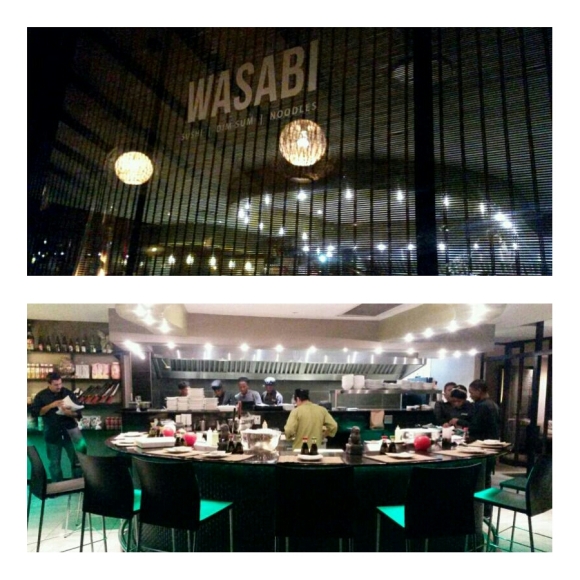 Continuing with my recent theme of checking out restaurants in my hood (Kempton Park is not technically my hood, but it’s in the east rand nevertheless!), I decided to have dinner at Wasabi with a few friends.

It was a cold and wet evening, but we were greeted with warm smiles when we arrived at Wasabi. We were promptly shown to our table, which was on the upper floor. However, the upstairs had a few diners and looked a little quiet so we requested a table downstairs which looked much more vibey. We were shown to a different table without any fuss.

In no time, our efficient waitress took our drinks orders and went about explaining the menu and the signature dishes of the restaurant. For starters we ordered a portion of crab & cheese dumplings, a spicy minced lamb gyoza and a portion of chicken bao and duck bao – steamed buns with different fillings. Each of the dim sums were really delicious and the chilly dipping sauce just made my day.

Wasabi is quite well known for its fusion sushi such as Creamy Rock Shrimp California (salmon California rolls with tempura prawns), Rainbow Reload (rainbow rolls with teriyaki sauce, mayo and caviar), Tiger Roll, etc. However, no one at our table seemed to want any sushi! Instead we decided to go with their equally acclaimed peking duck, served with Chinese pancakes and Hoisin sauce. We also ordered the sizzling beef, which was served on a sizzling hot plate and gave out enough smoke that led to some fellow diners jokingly chiding us about it being a non-smoking section! As sides we ordered a garlic rice and some vegetable stir fried noodles.

The service at the restaurant was impeccable and extremely attentive. At no point did we need to holler or seek our waitress’s attention. She seemed to materialise even before we lifted a finger.

The sizzling beef was the highlight of the evening. I just loved the charred succulent pieces of beef along with the black pepper. The peking duck was good too but a tad dry. I find that few places in Joburg are able to get this bird right. Erawan in Bedfordview is one place that makes an amazing crispy duck.

A great meal needs to end well too. So for dessert, we went with the nutella, banana and mascarpone spring roll and the duo of dark & white chocolate mousse. Since the restaurant did not have the white chocolate mousse, our waitress informed us that the dessert would come with vanilla ice cream instead. We decided to go with it. The spring roll was nice and crispy and the filling was delicious. However, the mousse was not quite there and tasted rather flat.

Overall, we had a great evening with spectacular service and good food, and despite the fact that this place is a tad pricey, we would definitely go back again. We were also treated to some complimentary shots!