For a beautiful city like Munich, 24 hours are definitely not enough! If possible, I would spend at least two full days, if not three. Unfortunately, K and I only had a weekend in Munich, of which one of the day’s was spent entirely at the Oktoberfest (you can read about it here)! So we were left with only a day to squeeze in the sightseeing.

When time is short, one of the quickest and best ways to explore a city is via a tour bus – the hop on hop off kinds. I usually prefer exploring a place at my own place and make my own itinerary, but with Munich there was just no time. So I quickly looked up the companies offering a city tour. There are a few options to choose from, and I settled with Grayline. Now the online reviews were not good for any of the companies but I decided to take our chances and went with minimal expectations. And after having taken the tour, I have to agree with the reviews – city tours in Munich are pretty bad! So I would not advise them unless you are really short of time. We didn’t really mind to be honest, as we just wanted to see the main sights without having to figure out how to get to each place on our own.

The tours all start from the Munich Haufbhanhof (central train station), but you can board them from any stop and buy tickets in the bus.

We started the tour with a visit to the exquisite Nymphenburg palace and its sprawling gardens. Since the city centre was closed to vehicular traffic until 2pm on account of the Oktoberfest parade, the bus went straight to the other end of the city. This baroque palace used to be the summer residence of Bavarian monarchs and electors. The lavishly decorated Great Hall will take your breath away.

The next stop was primarily for K and two other friends – the BMW museum located just across from the Olympic Park. For people like me, who aren’t really into cars, this would be a waste of time. So I left the others and continued on the bus as it drove past sights like the Victory Gate or Siegestor, which is an arch dedicated to the Bavarian army, and the Walking Man – a 17 meters tall sculpture by Jonathan Borofsky built in 1995.

Driving past the Ludwig-Maximilian University and the Ludwigskirche, a beautiful Romanesque church, the bus carried on towards Odeonsplatz, a beautiful square named after a concert hall called Odeon. There are several interesting buildings at this square. There is the Feldherrnhalle, commissioned by King Ludwig I to honour the Bavarian army and its victorious generals; the Theatinerkirche, an Italian church built in the seventeenth century to celebrate the birth of Prince Max Emanuel; and the Hofgarten, which is a court garden created between 1613 and 1617. 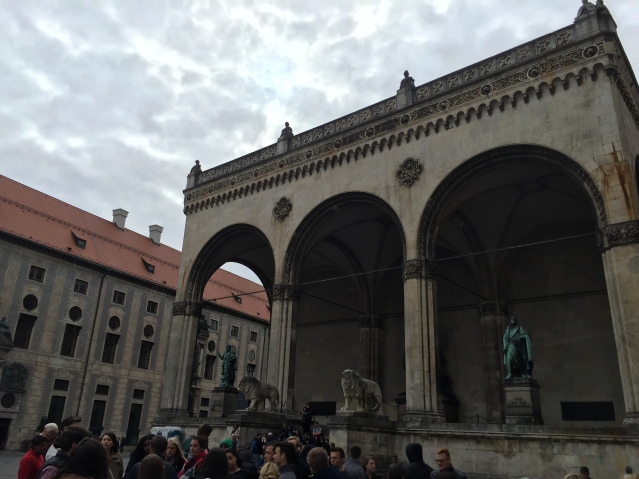 By the time I was done exploring Odeonsplatz, I was joined by the others and we took the next bus towards Prinzregenten Street. This street is a Mecca for art lovers as both, the Haus der Kunst ( a museum of contemporary art),  as well as the Bavarian National Museum (museum of art and cultural history) are located here. The bus does not stop here but it’s worth while to walk from Odeonsplatz to see surfers riding waves at the Englischer Garten!

The bus then hurtled along the Maximilianstraße and we caught a glimpse of a grand building called Maximilianeum, which is now used by the Bavarian Parliament. Running out of time, we decided to skip the Munich Residenz, which served as the official home of Bavarian monarchs.

The final stop for us was Marienplatz, Munich’s most famous square, which is dominated by the New Town Hall. To the east of the square lies the Frauenkirche, or the Cathedral of Our Dear Lady, a large Gothic building and an important landmark.

Some of the other places worth visiting are Königsplatz, with its three classical buildings – the Propyläen (an ornate gateway), the Glyptothek (a collection of ancient Greek and Roman Sculpture), and the Antikensammlungen (an antiquities museum). Not far from here is the Kunstareal, or the museum quarter of Munich which houses the three Pinakotheken galleries and several other art galleries. 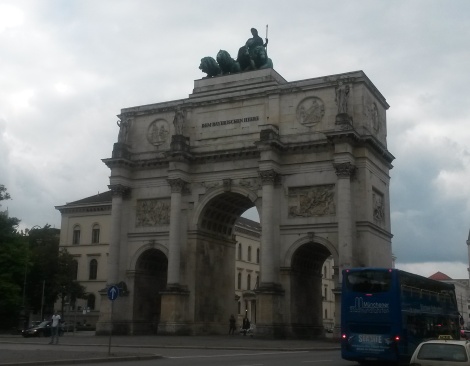 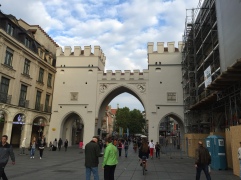 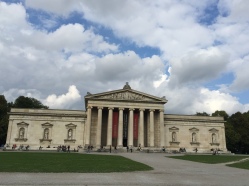