After months of contemplation, K and I finally made it to Namibia with some friends this Easter. The plan was simple – drive your way through the country and mix it up with lots of camping and a few hotel stays! In my previous post, which you can read here, I outlined our very ambitious itinerary. To any normal person, this itinerary will seem like madness. But having been there and done that, I can say this with conviction – it was this madness that made the trip so remarkable!

Having arrived at Windhoek late in the evening on Friday, we were chauffeured to our car rental office bright and early on Saturday morning. The plan was to pick up the car, stock up on groceries (since it was primarily a camping trip), and leave for our first destination as quickly as possible. Since we were hiring a fully equipped 4×4, that came replete with roof tents, a small fridge, a table, 4 chairs, cooking gear, utensils and cutlery – the rental process was anything but quick. So we had to allow sufficient time for the rental agency staff to take us through the do’s and don’ts of our contract and then run us through the car as well. To be honest, all of us were in awe of this car that was going to be our home for the next 10 days. I could not wait to set up camp that night and climb into our roof tent!

After finally completing all the paperwork etc., and buying all the food at the local grocery store in Windhoek, we were on our way to Mariental, our first stop. The drive was fairly easy, just over 3 hours, giving us enough time to get used to the car and the roads of Namibia. The high point of this journey was crossing the Tropic of Capricorn! We reached the  Bagatelle Kalahari Game Ranch, our campsite for the night in good time. Set amid the red dunes of the Kalahari, the campsite provided us uninterrupted views of the surrounding desert.

Sleeping under the starlit sky and waking up as the first rays of the sun hit the ground was a wonderful experience. Although I knew that I would be able to enjoy this for many more days, I still felt the need to hold on to the feeling. Holidays as we all know, seem to fly by fairly quickly. 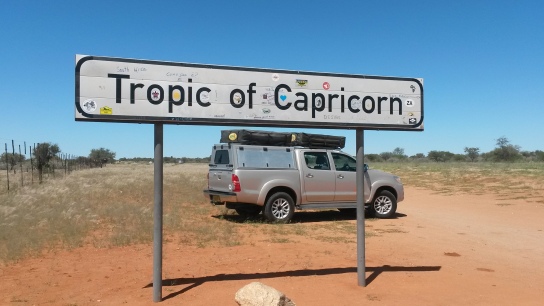 Setting up camp was easy. But packing it all back, especially the tents, was where the challenge lay. Although we did manage to master the technique over the course of the trip,   this was the part that proved slightly tiresome, especially since we were camping for just one night at each place.

From Mariental, we carried on driving towards the Fish River Canyon, stopping at Keetmanshoop to see the Quiver Tree Forest. The trees are actually a kind of aloe and are so named because ancient bushmen used the branches of these trees to make quivers!

After another three or so hours later, we arrived at the Canyon Roadhouse. Located just 30mins outside of the canyon, this place was the perfect stop. The roadhouse looked like an American western movie set! Old cars and trucks strewn around the front as well as inside the bar, the place was quirky and cute at the same time. A few beers later it was time to head off to the canyon to watch the sunset.

With a depth of up to 550 metres, the Fish River Canyon is the second largest canyon in the world. Formed millions of years ago as a result of water erosion and the collapse of the valley bottom due to movements in the earth’s crust, the deep ravines and gorges of the canyon are a magnificent sight. The setting sun provided the perfect backdrop for some stunning pictures and the peace and tranquility was perfect to enjoy a cup of coffee made at the back of our car.

The next morning, after a nice and hearty meal, we set off towards Lüderitz – a small harbour town sandwiched between the barren Namib Desert and the windy South Atlantic coast. The drive from the canyon to Lüderitz was one of the most scenic drives I have ever been on. Leaving behind the shrubs and boulders, the landscape changed to towering dunes and arid land. The vast desert on either side, a de-commisioned railway track partially buried under a huge dune, the endless road creating giant mirages and remoteness of the area, added to the appeal of the drive. It is on this road that one is able to see the wild horses of Namibia – probably the only herd of feral horses in all of Africa. Just an hour or so outside Lüderitz, around Aus there is a man-made waterhole and a viewing point where you may be lucky to spot a few of these majestic animals.

Lüderitz rose to prominence in the early 1900’s when diamonds were discovered in the area. This was also the time when the mining settlement of Kolmanskop was set up. However, a few years later, when diamond mining moved further south, Kolmanskop was abandoned and Luderitz also lost its allure. Despite it unique geographical location and German art nouveau architecture, the town never regained its former glory and even today, it looked like it has ben caught in a time warp. Kolmanskop is now a ghost town which is open to visitors during the day. Walking through the sand-filled rooms of houses that were once grand and beautiful, and full of life and laughter, was an eerie feeling. 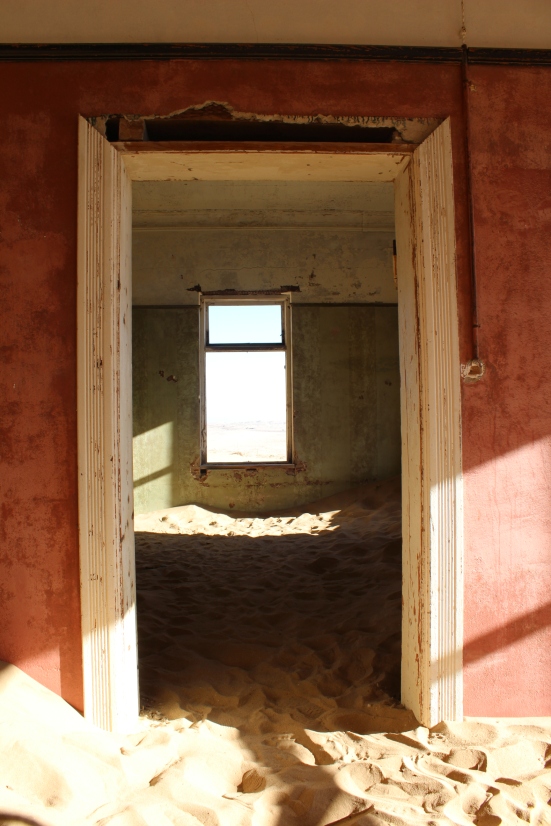