This may be hard to believe, but it’s true! When I first heard about it, even I was flabbergasted. This was about three years ago when K told me that he had never seen the Taj Mahal – one of the greatest wonders of the world and the most beautiful ode to eternal love. The reason why I found this to be so abnormal is because K has spent most of his life in New Delhi, which is merely 200 or so kilometers from Agra, where the Taj Mahal is located!

To me this was just wrong and it had to be made right. K’s sister and I decided that come what may, we would have to take a day out and drive to Agra this year. So we fixed a day and left home at around 6.30am, armed with chips, biscuits, chocolates and drinks that was fit for a 3-day road trip and not just a few hours! Thanks to the new Yamuna Expressway (a six-lane highway), the drive from Delhi to Agra now just takes 3 hours as opposed to the 5 hours it took earlier. However, somewhere between driving and stopping for breakfast, we decided to take a detour and stop at Fatehpur Sikri, also a UNSECO World Heritage Site, which was built by the Mughal Emperor Akbar in the 16th century to honour a Sufi saint called Salim Chishti.

Located just 30kms outside Agra, Akbar shifted his capital from Agra to Fatehpur Sikri. But this was short-lived. After a period of only 15 years, the city was abandoned due to the paucity of water. However, the opulent buildings of Fatehpur Sikri still stand and are one of the finest examples of Mughal architecture. Built in red sandstone, the monument consists of intricately designed buildings such as the Panch Mahal, Diwan-I-Khas, Bland Darwaza, Salim Chishti’s dargah, Jama Masjid, Birbal’s house, etc.

Each of these buildings are unique in their style and architecture and portray a blend of both Hindu and Muslim designs. Wandering through the long corridors and the courtyards, one can’t help but imagine what life would have been amidst such opulence and splendour.

Hurrying through Fatehpur Sikri, we finally made our way to what we had really come to see – the Taj Mahal. In order to protect the monument, cars are not allowed near the Taj Mahal. A huge parking lot has been created a short distance away and tickets for the entrance can be bought here as well. Shuttle buses that cost Rs 5 one way then ferry visitors to the Taj Mahal (Fatehpur Sikri also has similar restrictions).

Taj Mahal is one of the busiest tourist attractions, and for good reason too. There is absolutely no lean period to visit so be prepared to share your experience with throngs of people, unless you plan your visit in the early morning, as soon as the monument opens. We, of course, had no such plans so when we arrived, hundreds of people were already inside. But we didn’t mind. There was enough of Taj to go around.

Irrespective of how many times one visits, the Taj still has the power to take your breath away in the first glance! Commissioned by Shah Jahan in 1632 to house the tomb of his favourite wife, Mumtaz Mahal, the monument is built with white marble and stands on the banks of the river Yamuna. Amazing workmanship can be seen in every part of the monument. From intricately craved blooms on the walls to the meticulously inscribed Holy verses, from the floor tiles to the beautiful gardens and fountains – the Taj Mahal is awe inspiring in every way.

The view from the Taj to the entrance 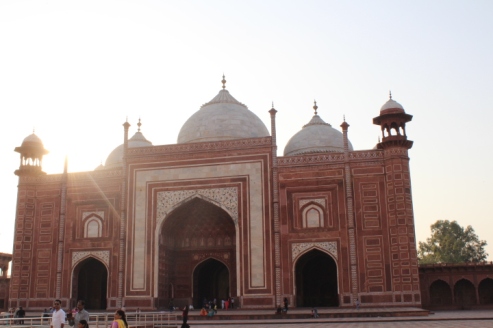 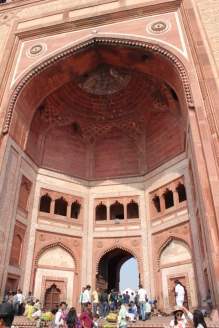 Inside the Buland Darwaza, Fatehpur Sikri